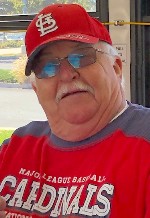 Terry was a child of God. He was a 1967 graduate of East St. Louis Senior High School. Terry was called to service in the United States Army during the Vietnam war. He served from 1968 to 1972. After military service, he graduated from Ranken Technical School as a mechanic. He worked in maintenance at Big River Zinc in Sauget, IL, and Prairie State Plant in Marissa, IL. He ended his working years September 2020, retiring from East St. Louis Housing Authority. Terry was a wonderful husband, loving father, and devoted grandpa. He was a passionate Cardinal and Blues fan and avid music lover. Terry loved to travel with family and visit local casinos to try his luck on the machines, as well as scratch offs, during chemo treatments.

He was preceded in death by his parents, Charles Ray and Myrtle Ruth, nee Armstrong, Coleman; and a brother, Larry “Bear” Coleman.

Memorials may be made to the charity of the donor’s choice, or Siteman Cancer Center, Shiloh, IL. Condolences may be expressed to the family online at www.rennerfh.com.

Funeral: A celebration of life service will be held at 3 p.m. Sunday, December 5, 2021, at Catholic War Veterans, Freeburg, IL, with Mel Gunter officiating. Terry would request that attendees wear Cardinal Red or St. Louis Blues attire. Following the service there will be fellowship time with family and food will be served.