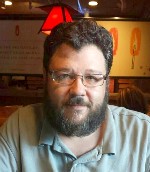 Ted grew up in Sparta, IL, spent many years in the Belleville, IL, area, and then many years in Lakeland, FL. He was a beloved son, brother, uncle, and a true friend.

Ted was a history buff and an avid music lover, particularly grunge and classic rock. He loved attending concerts; his favorite bands included Pink Floyd and Counting Crows. Ted was also an avid fan of baseball and football, especially the Pittsburgh Steelers. His favorite thing to do was “hang out.” He loved to watch movies, laugh, tell jokes, play Dungeons & Dragons, and genuinely get to know people. He took after his father in his ability to make connections everywhere he went, including with coworkers and customers at Sam’s Club, where he worked for 12 years. Ted was always happy for others, and was there with a thumbs up, words of encouragement, or a “good job!” Ted will be remembered for his integrity, loyalty, and kindness to others regardless of gender, race, age or status.

He was preceded in death by his father, Herbert J. Lantz Jr.

In lieu of flowers, please consider making a donation to the family to raise much-needed funds to cover funeral expenses. Ted’s death was very unexpected, given his age. Condolences may be expressed to the family online at www.rennerfh.com.