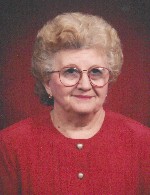 Mrs. Vogel was a homemaker.  She was a member of Sacred Heart Catholic Church in  Du Quoin, IL.  She loved quilting, music, gardening, and dancing, but most of all, enjoyed her family.

Memorials may be made to National Alzheimer’s Association. Condolences may be expressed to the family online at www.rennerfh.com.