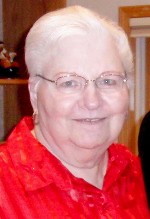 Mrs. Tecu was a graduate of Madison Senior High School, Madison, IL. After a career as a secretary at Granite City Steel, she moved to Lake of the Ozarks. She returned to the Metro East in 2005 after the death of her husband. During her active years, Therese enjoyed the serenity of the Lake of the Ozarks. She was also an avid reader, enjoyed singing in the choir, bowling, and playing cards. Therese was a member of Holy Trinity Catholic Church, Fairview Heights, IL.

She was preceded in death by her husband, Edward Tecu, whom she married on August 2, 1986, and who died on February 4, 2005; an infant son, Mark Sanders; her parents, Peter and Marcella, nee Misukonis, Karpowicz; three sisters, Ann (Onufry) Gregowicz, Martha (Wendell) McIlvoy, and Caroline (Roland) Sax; and a brother, Anthony (Clara) Karpowicz.

Memorials may be made to Holy Trinity Catholic Church, Fairview Heights, IL, or to the charity of the donor’s choice. Condolences may be expressed to the family online at www.rennerfh.com.

Burial will be at Calvary Catholic Cemetery, Edwardsville, IL.