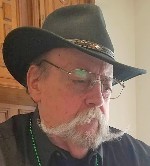 Print Obituary
In the early morning of October 6th, 2021, Thomas Wayne Allbee adjusted his worn-in black Stetson hat, waxed his handlebar mustache, and hoisted his cane – its California-crafted bronze eagle head glistening in the sun – for one last trip down the “dusty trail”.

…That’s the story HE would have told, anyway, with a wink and a smirk and probably an off-color joke about “trails” of one sort or another.  In actuality we know he passed quietly in his home, very much how he would have wanted: napping on the sofa between bouts of munching on one of his infamous “belly bomber” burgers and animatedly yelling at DVR recordings of recent football games, armchair-quarterbacking with such invaluable observations as “Butterfingers! Get that ball!” and “GO GO GO!”.

Born on September 20th, 1947, and a proficient curmudgeon even from a young age, Tom made an art of being as charming, humorous, and affable as he was grumpy, exacting, and unapologetically stubborn.  Everything had its place and its very specific way to be, and woe upon those who didn’t follow his directions.  Yet for every story of Crabby Tom there are three more of Generous Tom, Thoughtful Tom, Jokester Tom, and Dependable Tom.  For those he counted among his confidantes and friends, there was nothing he wouldn’t do.

He spent his early life in California being handsome, scrappy, and a very adept footballer (the American version – sorry, Barcelona), the latter of which would become far and away his lifelong favorite pastime.  Much to his chagrin, neither of his children grew up to join the 49ers’ starting lineup, though at least they both know what a line of scrimmage is.

After marrying once (to Ann), having a daughter (Kim), marrying again (to Cheryl), and having a son (Dan), he decided the third time would not be the charm and settled gradually into the Good Life of bachelorhood instead, which he staunchly maintained for the rest of his days.

Following his stint in the United States Army during the Vietnam Era, Tom’s middle years onward were spent in Illinois, where he landed a civilian gig at Scott Air Force Base as a carpenter and worked his way up while maintaining a very effective secondary career of habitually vexing every ranking officer, “pencil pusher”, or “clown” who ruffled the minimal amount of hair left on his head.  The fact that he successfully made it to retirement was as much a minor miracle as it was a testament to his work ethic, skill as a craftsman, and ability to make & retain close comrades upon whom he could rely on to pull his butt out of the line of fire.

Following retirement, Tom had more than his fair share of health issues – who would’ve thought half a lifetime of inhaling Camel Unfiltereds and single-handedly keeping the stock price of Pabst Blue Ribbon in the black might take a toll? – but with typical unbothered austerity, he persevered.  The trademark handlebar mustache grew a bit more scruffy and gray, the cane became a commonplace fixture, and he didn’t tap-dance like he used to, but he still made time for his passions.

A regular member of the Scott POW/MIA council spanning three decades, Tom never missed a meeting or ceremony if he could help it.  His participation was a point of great pride for him, and he wore it as a badge of honor until the very end.  He was also a vocal card-carrying ASPCA Guardian and dedicated dog-father to BoJangles & C.P. (short for “Co-Pilot”), a couple of elderly rescue gents who traveled with him everywhere.  BoJangles, in particular, formed nothing short of a fan club in the Metro Belleville Area and Tom loved taking him out to see the world, telling the story of how he was “rescued after 7 years in a cage” on average 137 times per week.  Like peas and carrots, those two.

Tom never wanted or needed very much, preferring a life of general simplicity over any fancy trappings – making exceptions only for his food, his trucks, and the multiple very elaborate television setups on which he would watch his aforementioned football games.  Anyone who knew him knew he never wanted any fuss on his behalf, and he never wanted attention or special treatment…unless he needed help finding something online.  If it’s Computer Time, block out your next six hours for that.  Otherwise, he lived very much by the same wisdom he imparted: Say please and thank you.  Always tip and tip generously.  And don’t put up with any bullsh*t.

He’d be quietly flattered to know how many people are going to miss “putting up with” him now, and how fondly he’ll be remembered.

He is survived by his daughter, Kimberly; and his son, Daniel.

In keeping with his wishes, there will not be an elaborate funeral service held for him.  He will be cremated, returned to California where some may say his heart never truly left, and set adrift back into Half Moon Bay.

Memorial donations in his honor can be made by buying a round for your dozen closest friends and knocking one back for old times.  Or, more traditionally, to the Scott Air Force Base POW/MIA Council (payable to: Terry Jenkins, POW/MIA Council President – 221 West Mill Street, Marissa IL, 62257) or to the ASPCA (www.aspca.org/donate). Condolences may be expressed to the family online at www.rennerfh.com.