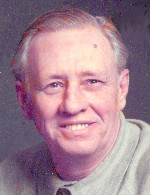 Tom retired from Norfolk and Southern Railroad after working over 40 years. He was a member of St. Augustine of Canterbury Catholic Church, Belleville, IL. Tom was a World War II U.S. Navy veteran and a Korean War U.S. Army veteran.

He was preceded in death by his parents, Joseph E. and Lula, nee Padgett, Arterburn; and two brothers, Donald Thomas and Richard Arterburn.

Memorials may be made to the Catholic Urban Program. Condolences may be expressed to the family online at www.rennerfh.com.

There will be no visitation.