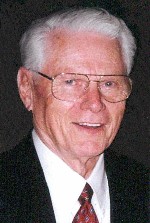 Tom was a World War II and Korean War veteran serving in the Army from 1945 to 1952.  He was fortunate enough to go on an Honor Flight Mission when he was 90 years old. He retired in 1988 from the Defense Mapping Agency in St. Louis, MO, where he was a cartographer.  Tom worked on the Mercury, Gemini, and Apollo Space Mission maps during his career.  He was a scoutmaster of Troop 42, Wood Badge trained, and member of the Order of the Arrow. Tom was an avid reader and master of genealogy, researching his family tree. He also enjoyed gardening and the wonders of nature.  He traveled to many countries, most recently to London and Paris while in his 90’s.  He was a member of NARFE and the American Legion.

Memorials may be made to Hospice of Southern Illinois or to the Sisters of St. Joseph of Carondelet. Condolences may be expressed to the family online at www.rennerfh.com.

Burial with military honors will be at Green Mount Protestant Cemetery, Belleville, IL.