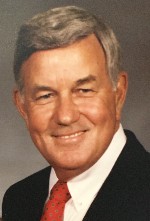 A lifelong resident of Belleville, IL, he was an avid golfer, fisherman, and baseball player for many years.  Tom was a first baseman at Belleville Township High School and went on to play in several post-high school leagues.  He was a lifelong St. Louis Cardinals fan.  In 1954, he constructed the Erwin family home. Many wonderful memories were made there with friends, children, and grandchildren.

Mr. Erwin worked as an engineer for Monsanto before retiring in 1985.  Tom and his wife Myrt enjoyed their retirement years together, spending winters in Tucson, AZ, where they made lasting friendships.  Tom treasured his friends from Franklin Grade School and Belleville Township High School and continued those relationships throughout his life.  He was a man who exemplified great integrity.  His gentle strength and kindness were gifts to all who loved him.

He was preceded in death by his wife of 62 years, Myrt, nee Rauschkolb, Erwin; his parents, Thomas E. and Carrie M., nee Wright, Erwin; a daughter, Peggy Jacobson, and a great-grandson, Luke Thomas Elliott.

Memorials may be made to St. Paul United Church of Christ, 115 West B Street, Belleville, IL, 62220.  Condolences may be expressed to the family online at www.rennerfh.com.

Visitation:  Friends may visit with the family from 2 to 6 p.m. Wednesday, April 13, 2016, at George Renner & Sons Funeral Home, Belleville, IL.

Funeral:  A Celebration of Life Service will be held at 6 p.m. Wednesday at the funeral home.

Our deepest condolences to his family … heard many a wonderful story about this wonderful man from Peggy. You are ALL in our thoughts and prayers!

We were so sorry to hear of Tom’s passing. We wanted to let you know that we are thinking of you all. Even though we live far away, we will be there in prayers and thoughts.

Dan, Gina and The Schwemmer Family

What a beautiful tribute to a life well lived. A man who was so loved will be greatly missed. Our family is praying that you find peace in God’s promises.