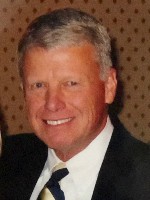 After graduating from Cathedral High School, Belleville, IL, in 1960, he went on to study commerce and finance at Saint Louis University, joining Tau Kappa Epsilon fraternity and graduating in 1964. He then attended Saint Louis University Law School for two years before entering the United States Air Force, from which he was honorably discharged in 1972 and awarded the Air Force Commendation Medal.

In 1967, Tom married Nancy C. Garidel in St. Louis and began a wonderful and fun 54-year marriage. After serving his country, he spent his career in Belleville at Building Products Corporation, growing and diversifying the business, and retiring as a co-owner in 2005. He was a member of various professional and community organizations.

After retiring, Tom spent his time traveling extensively with Nancy and enjoyed spending time at their chalet in Innsbrook, MO, time with his grandchildren, and gatherings with friends and neighbors. He was blessed with strong friendships that lasted across many decades.

Tom is remembered as a hard-working man who was devoted to his wife and children. He was a lifelong and loyal member of the Catholic Church, attending St. Luke’s, Cathedral of St. Peter, and St. Joseph’s in Freeburg, IL. He enjoyed his time in nature, fishing, playing tennis, reading and being with his wife. Those who knew Tom would describe him as caring, kind, appreciative, and welcoming, with a disarming smile and manner.

He was preceded in death by his parents, Edward A. and Melva L., nee Hurst, Grandcolas; and a son-in-law Brett K. Gorman.