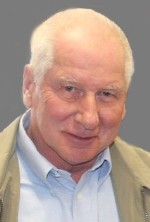 Mr. Hynes retired from High Mount School District #116 as director of maintenance. He was a member of St. Teresa Catholic Church, Belleville, IL, and a former member of the Gateway Golden Retriever Rescue.  Tom was a United States Air Force veteran.

He was preceded in death by his parents, Thomas V. and Helen I., nee Stacom, Hynes; a sister, Barbara (Russell) Ciotti; his father-in-law and mother-in-law, Frank and Hazel B., nee Denton, Rowden; and a brother-in-law, Walter E. Rowden.

Surviving are his wife of nearly 56 years, Frances L., nee Rowden, Hynes, whom he married June 19, 1965, at the Scott Air Force Base Chapel; a daughter, Julie (Alan) Haake of Swansea, IL; a grandson, Sam Haake; and nieces and nephews.

Funeral: A Mass of Christian Burial will be held at 11 a.m. Tuesday, May 18, 2021, at St. James Catholic Church, Millstadt, IL, with Msgr. Marvin Volk officiating.