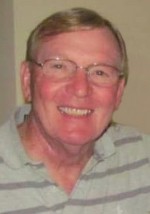 Print Obituary
Thomas Oscar Henry Luehder, 79, of Belleville, IL, born February 24, 1941, in Belleville, IL, died Monday, May 18, 2020, surrounded by loving family in his home on the lake in Eatonton, Georgia.

Tom’s work history was driven by his relentless work ethic, his ability to organize, coordinate, and implement his vision, and his honest handshake that told you he would do what he said he would do.  He truly was a self-made man as he began his working career in the mail room at Emerson Electric in 1959, and later taking every opportunity he could to further his career.  Tom and Marla were a courageous couple that were always up for an adventure.  Their first pivotal move was in 1972 to Eldora, Iowa, as Tom took a regional sales manager position with Trojan Seed Company.  His future career in the agricultural industry had begun and would take them next to Atlanta, Georgia, where he built a multi-million-dollar company as President of Agri-Tech from just an empty office space.  The pinnacle of his career took them to Beijing, China in 1994.  As President of D&M International, Tom spent three years establishing joint venture seed companies with the Chinese entities and Monsanto. From the mail room at Emerson to President of the International Division of Delta & Pineland Company, responsible for cotton seed companies on five continents, Tom retired in 2007 with the whole world in his hands.  Tom enjoyed fishing, golfing, and playing cards.  Most importantly, Tom loved his family.

He was preceded in death by his parents, Elvin George and Helen, nee Higgins, Luehder.

Memorials may be made to the Wounded Warrior Project or to St. Jude Children’s Research Hospital. Condolences may be expressed to the family online at www.rennerfh.com.

Funeral:  Private family services will be held Saturday, May 23, 2020, at George Renner & Sons Funeral Home, Belleville, IL. A celebration of Tom’s life will be held at a later date.