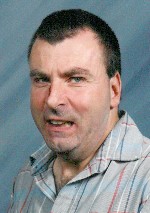 Tom always enjoyed being home with his family, especially his little nieces and nephews.  He enjoyed singing and dancing, gardening, and fishing.  He loved the St. Louis Cardinals and helping to prepare holiday dinners.

Memorials may be made to Special Olympics Illinois or to St. Henry’s Catholic Church.  Condolences may be expressed to the family online at www.rennerfh.com.