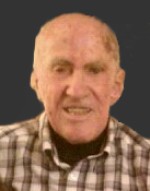 Mr. Thompson retired as a manager for Southwestern Bell Telephone Company and was a member of the Telephone Pioneers of America.  Tommy was a founding member of Our Lady Queen of Peace Parish in Belleville, IL, where he worked on the fish fries for many years.  He also helped deliver Meals-on-Wheels and had been a member of the Belleville Barbershoppers.  He loved singing, especially Christmas caroling with his family.  Tommy enjoyed playing the banjo, the harmonica, and the guitar.  He was, as well, an avid gardener.  A World War II U.S. Army Air Corps veteran, he served with the 13th Air Force, 5th Bomb Group, 394th Bomb Squadron.

Tommy was preceded in death by his wife of 70 years, Rita M., nee South, Thompson, whom he married on August 9, 1943, and who died on April 18, 2014; his parents, William and Mary, nee Raley, Thompson; four brothers, Jim, John, Bruce, and Owen Thompson; and three sisters, Jesse Frazer, Myrtle Moriarity, and Josephine Sellon.

Memorials may be made to the Allegro Chorale, 120 West Main St., Suite 116, Belleville, IL  62220, www.allegrochorale.org.  Condolences may be expressed to the family online at www.rennerfh.com.

Funeral: A Mass of Christian Burial will be held at 11 a.m. Monday, March 16, 2015, at Our Lady Queen of Peace Catholic Church, Belleville, IL, with Msgr. Jack McEvilly officiating.
Entombment with military honors will follow at Valhalla Gardens of Memory Mausoleum.

our family would like to wish each member of uncle eddie’s family our deepest sympathy at this time over the passing uncle eddie. he lived a great life and had a wonderful family. we have all been blessed.

Both Chuck and I are so sad about Tom’s passing. Him and Rita was the best neighbors we ever had. We missed them so much when they moved, but we both knew it was time. Chuck remembers all the Good Times he had with Tom and the ice tea Rita brought them when they were working on a project and took a break. I remember all the good talks I had with Tom and Rita and what they taught me about flowers and the stories of all you kids.We were neighbors for only a short time,since 2007, but we loved them both so much. They looked out for us as well as we looked out for them.We have missed them every day since they moved. The last people that bought their house are younger and have one little boy, and are so nice, but they just are not Tom and Rita. We still think of them often and always will. They are together again, but in a better place. GOD Bless each and every one of their family members.
Chuck and Lillian Woodcock

Uncle Tommy … you were a classic, and will be welcomed by so many awaiting your arrival in Heaven. I’ll never forget our visits to your wonderful home when I was growing up. What a family you and Aunt Rita raised … everything a Catholic family should be, and so much more. Say hello to Drucilla and Jack for me. So long … for now.