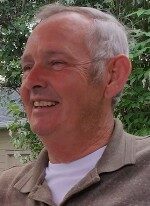 Tim served 23 years in the Air Force initially as a Tactical Aircraft Mechanic before transitioning to Air Traffic Control. He served in Philippines, Germany, Greenland, Chicago, and more before retiring from the Air Force while at Scott Air Force Base. Following his service, he was employed at Casino Queen where he enjoyed the roll of the dice at the craps table night after night.

He enjoyed bowling and was a member of several bowling leagues with Shelia, his wife, and built up a nice collection of trophies he would keep on display on his desk. Tim was an avid golfer, who would regularly play 36 holes in a single day which he would simply consider “A good day of golf.” He’d say his best day of golf was when he finally captured the elusive hole-in-one he’d been chasing for so many years. When he wasn’t on the golf course, he would adventure around the lands of Azorth using his arcane skills to vanquish his foes playing World of Warcraft.

A constant source of joy in Tim’s life were his grandkids, which he has 9. They would jump in his lap to watch him play computer games, sit at his side to enjoy the latest sci-fi movie, or get the occasional “burrito spin” ride with a blanket in the living room. He was much loved by his family and friends. Tim constantly looked for ways to help out a friend, neighbor, or family member with anything that needed to be done and will be greatly missed by those that knew him.

He was preceded in death by his parents and siblings.

In lieu of flowers, the family asks that any memorials be made to Alzheimer’s Association (https://act.alz.org/). Condolences may be expressed to the family online at www.rennerfh.com.

Funeral: Small service for family and close friends will be held prior to burial with honors at Jefferson Barracks National Cemetery.