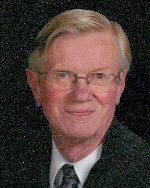 Mr. Burke worked as a lab technician for various companies throughout the years, and finally retiring from Solvay.  He was an avid train collector and enthusiast.  He was a U. S. Army veteran.

Visitation:  Friends may visit with the family from 4 to 7 p.m. Thursday, February 15, 2018, at George Renner & Sons Funeral Home, Belleville, IL.