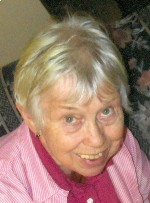 Mrs. Rombach worked as a medical technologist at both St. Joseph’s Hospital and St. Anthony’s Hospital, Denver, CO, before her retirement.

She was preceded in death by her husband, Howard Rombach; her parents, Lawrence and Elizabeth, nee Byrne, Herek; and a brother, Timothy Herek.

Memorials may be made to the Illinois Council on Aging or to the Alzheimer’s Association. Condolences may be expressed to the family online at www.rennerfh.com.

Funeral services will be held in Denver, CO, at a later date.

Burial will be at Mount Olivet Cemetery, Wheat Ridge, CO.

I knew Valerie when we both worked at St. Joe’s, and she was our neighbor in Congress Park. She was always friendly. I will pray for her at mass at St. Joe’s tomorrow, Feb. 8.
Sincere sympathies to the family.