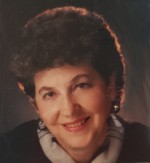 Mrs. Hensiek worked as a medical records coder and retired from the Civil Service at Scott AFB, IL. She was a member of Swansea Baptist Church, Swansea IL, and a volunteer for Programs and Services for Older Persons (PSOP).

She was preceded in death by her first husband, Edward Alberti, who died May 29, 1975; her parents, John and Dolly, nee Baker, Inman; a brother, Richard Inman; and a sister, Patricia Isenhart.

Memorials may be made to any local hospice of the donor’s choice. Condolences may be expressed to the family online at www.rennerfh.com.