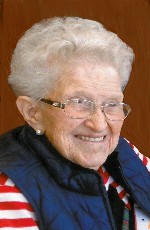 Mrs. Glock was a demonstrator at Famous-Barr and Schnucks for 27 years before her retirement. She was a member of St. Paul United Church of Christ, Belleville, IL. Velma was a 4-H Leader, a Girl Scout Leader, and a member of the PSOP. She belonged to the Home Bureau, the WSCS, and was “Queen” of the Marbles Club at Cedarhurst. Her most loved role was CEO of the Glock Family.

She was preceded in death by her parents, William John and Clara Emma, nee Jacob, Durdle; her husband of 61 years, Milton John Glock, whom she married on December 28, 1941, and who died on January 30, 2003; a grandson, Steve Buckhiester; a brother, Delmar William (Virginia) Durdle; and brothers-in-law and sisters-in-law.

The Glock family would like to give a special thank you to Dr. James Vest, Dr. Prasad Kandula, Dr. David O’Neill, Memorial Hospital, and the entire staff at Cedarhurst for the loving care they have given Velma over the years. The family also extends a thank you to George Renner & Sons Funeral Home and Lake View Memorial Gardens during this time.

In lieu of flowers, memorials may be made to St. Paul United Church of Christ, Belleville, IL, the Memorial Hospital Foundation, the PSOP, or to the charity of the donor’s choice. Condolences may be expressed to the family online at www.rennerfh.com.

Visitation: Per family’s request, no visitation was held.