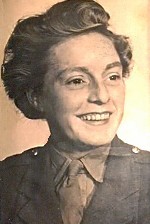 Mrs. Bartlett served in the British Army during World War II (1942 – 1946) as a Range Finder.  She was also an Army cook.  Later, she retired as an electronic assembler from Honeywell.

Vera was preceded in death by her husband of 50 years, James E. Bartlett, whom she married during the war on April 30, 1946; a daughter and son-in-law, Rita Oberhart-Servais and Christopher Servais; a daughter-in-law, Lesley Bartlett; her parents, Charles H. and Ethel May, nee Morgan, Hunt; a brother, Charles Hunt; and two sisters, Florence Gibins and Marjorie S. Sibson.

Funeral:  Funeral services will be held at 7 p.m. Wednesday at the funeral home with Chaplain Michael Garrison officiating.  Cremation will follow the services.