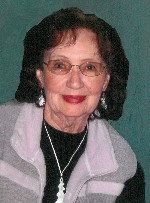 Vera was a devoted and loving wife, mother, and grandmother.  She was born to parents of German descent on September 23, 1924 in Tilden, IL.  Vera was the first born of four children into a family that was both spiritual and musical.  Her parents served in the Tilden Methodist Church where her father played trombone and her mother played piano for 50 years.  When the other children came along, Vera became the Alto voice of a vocal quartet.  The sang at church and at various picnics in the area.  Her family moved to New Athens, IL, in 1944 and continued the multi-generation family business, Lehr’s Meat Market.

Vera worked at a sewing factory after high school.  She met the love of her life, Matthew Robb, who was a piano player, at the Swanwick picnic when she was sixteen.  They married on November 6, 1944, during World War II, while Matt was on leave from the Army Air Corp.  Vera was a busy homemaker, perfecting her prize-winning apple pies.  She was an exceptional cook and baker.  She also had a green thumb and could grow most anything. Her rose garden and yard were manicured and beautiful.  Vera and her husband loved gardening; Vera in the flowers, and Matt in the vegetables.  They canned their fresh produce every year.

Vera and Matt raised four children: Kathy, Carol, Clyde and Cyndy.  The family were members of the Westminster Presbyterian Church in Belleville, IL. They traveled thru the United States, camping most of the time.  They later purchased land in Goose Creek Estates, Missouri, for many weekend getaways in their travel trailer.

Vera was an incredibly kind and gentle woman who was always faithful, supportive, positive, accepting, encouraging and most loving.  We were honored and blessed with such a wonderful mother and best friend!

She was preceded in death by her husband of 50 years, Matthew Frank Robb, whom she married November 6, 1944 and who died February 22, 1995; her parents, Emil and Olivia, nee Spitz, Lehr; two sons-in-law, Wilbert “Bill” Lugge and Rick Woodring; a daughter-in-law, Peggy Robb; a sister, Helen Lehr; a brother, David “Red” Lehr; and a brother-in-law, Rev. Jack Frick.

Memorials may be made to Westminster Presbyterian Church, Belleville, IL, or to the American Red Cross of Missouri – Greater St. Louis Chapter – Belleville, IL, 10195 Corporate Square Drive, St. Louis, MO, 63132.  Condolences may be expressed to the family online at www.rennerfh.com.

Visitation: Friends may visit the family from 10 a.m. to 12 noon, Thursday, January 28, 2021, at George Renner & Sons Funeral Home, Belleville, IL. Standard CDC guidelines, including masks and a limited number of visitors at any one time will be observed.

Burial will be held at 2:30 p.m. at Swanwick Bethel Cemetery, Swanwick, IL.