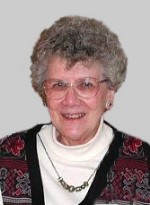 Mrs. Hiller had worked for Chicago Title & Trust Company and at the Belleville East High School bookstore.  She was a member of St. Mary’s Parish, Belleville, IL, and Our Lady of Good Counsel Sodality at the church.

Verla was preceded in death by her parents, Roy M. and Gladys A., nee Villemain, Scheibel; a sister, Doris (Charles “Pat”) Wade; a sister-in-law, Georgette Scheibel; and a brother-in-law, Vince Ferreri.

Verla’s family would like to extend special thanks to the staffs at Cedarhurst and at Heartland Hospice for their care and concern through this difficult time.

Memorials may be made to the Alzheimer’s Association or to Heartland Hospice.  Condolences may be expressed to the family online at www.rennerfh.com.

My deepest sympathy. She was a kind Aunt and loved children. We will miss Aunt Verla.

Love you, grandma! I will remember all of our fun memories fondly. xoxo

My deepest sympathies to Bill and the family. She was such a great lady and the love of Bill’s life. She will be missed by many.

Sending hugs your way! May you always remember the good times with your wife, mother, and grandmother.