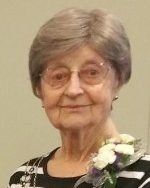 Verna was a devoted mother, grandmother, and great-grandmother.  She stayed home to raise her family until her children were in high school.  She later worked for Schroeder’s Catering for 23 years before her retirement.  She was a member of St. Henry’s Catholic Church, Belleville, IL, where she volunteered for many church functions, events, and fish-frys.  She was a member of the St. Henry’s ladies’ club and a volunteer for the St. Vincent DePaul Society.  Most recently, she enjoyed activities and spending time with her Cedarhurst friends and hanging out with her best feline friend, Sassy.

She was preceded in death by her husband of 52 years, George R. Frederick, whom she married on November 20, 1954, and who died on December 11, 2006; one son, Kevin G. “Muggs” Frederick; one grandson, Maxwell Frederick “Max” Paul; her parents, Ervin and Alvina, nee Schomber, Spaeth; one brother, Richard Spaeth; one sister, Elvira “Sis” Kues; and three siblings in infancy, Clifford, Leo, and Mary Ellen Spaeth.

Memorials may be made to St. Henry’s Catholic Church or to the American Cancer Society.   Condolences may be expressed to the family online at www.rennerfh.com.

Entombment will be at Valhalla Mausoleum, Belleville, IL.