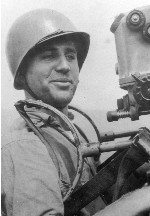 He was a lifelong resident of the area. He was born on January 26, 1924, in Belleville, IL, to Reginald and Elizabeth, nee Herzig, Beaumont. Vernon married Helen Plogmann on February 13, 1947, at St. Henry’s Catholic Church.

Vernon attended High Mount School when it had two rooms divided into first through fourth grades and fifth through eighth grades. His job was to stoke the coal furnace and take the ashes out each morning. A year and a day after the attack on Pearl Harbor, he enlisted in the U.S. Coast Guard. Vernon served three years, two months, and two days, mostly in the Pacific Theater. He was assigned to the attack cargo ship USS Albireo, and he sailed out of San Francisco to Pearl Harbor, Eniwetok, the Hebrides, the Philippines, Espiritu Santo, Guadalcanal Manus, New Guinea, Okinawa, and finally Yokosuka, Japan. After returning home from serving his country, he attended the Belleville Barber College, worked 30 years at Swift & Co. in National City, IL, and retired from Belleville Township High School in 1986 as chief maintenance engineer.

Vernon was a good dancer and could fix anything. He enjoyed traveling, and had visited all 50 states, and spent many winters in Florida. He was a hard worker and ran a Belleville News Democrat paper route to help his family through the Great Depression in the 1930s. He recalled, “The $5 a week I earned went to buying staples like sugar, salt and flour.” After World War II, he worked two jobs while he built two different houses for his young family.

He was preceded in death by his wife of 67 years, Helen, nee Plogmann, Beaumont; his parents, Reginald T. and Elizabeth, nee Herzig, Beaumont; and two sisters, Norma Wright and Betty Walter.

Visitation:  Friends may visit with the family from 9 to 11 a.m. Saturday, December 9, 2017, at George Renner & Sons Funeral Home, Belleville, IL.