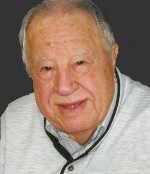 Mr. Vogt was the owner and operator of E. G. Vogt Oil Company in Belleville, IL, and the former owner of Vogt Ice Company.  He was a 50 year member of the Ainad Temple Shrine of Southern Illinois, East St. Louis, IL and he was also a member of the Masonic Lodge.   Vernon was a veteran of the U.S. Army

He was preceded in death by his wife of 47 years, Joanne, nee O’Banion, Vogt, whom he married on December 14, 1951, and who died on November 14, 1999; his parents, Edward G. and Minnie A., nee Plickebaum, Vogt; one sister, Florene (Edward) Berkel;
one brother-in-law and sister-in-law, William and Jeanette Condon; and one nephew, Brian Vogt.

Funeral:  Funeral services will be held at 10 a.m. Saturday, December 12, 2015, at the funeral home with Rev. Jay Krumeich officiating.  Burial will follow at Valhalla Gardens of Memory, Belleville, IL.