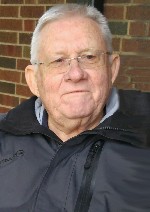 I often think that people we have loved and who have loved us not only make us more human, but they become part of us and we carry them around all the time whether we see them or not.  And, in some way we are the sum total of those who have loved us and those we have given ourselves to.  Vince’s essence remains with us.

Vince was a graduate of Fordham University, served in and retired from the United States Air Force, worked in the private sector, was involved in the wellbeing and maintenance of St. John’s Catholic School in Belleville, coached sports, volunteered his time at St. Luke’s in Belleville and never knew a stranger.

Vince loved life, his family and our country. Vince cooperated generously with the evolutionary process and the world is richer for his part in this vast universe.

Vince always exercised his right to vote and wants every person to have equal and easy access and opportunity to vote.

There will be no public viewing or services.  Our family celebrates Vince, Dad, Papa.