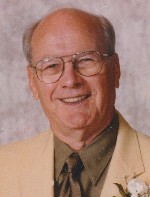 Print Obituary
Vincent “Butch” Herman Wobbe, 91, of Belleville Illinois, loving husband, father, grandfather, and great-grandfather passed away peacefully on Monday, March 13, 2017, at his home in the Shrine of Our Lady of the Snows Apartment Community in Belleville, surrounded by his wife and seven children. He was born on October 29, 1925 in Germantown, Illinois. He grew up on a farm outside of New Baden, Illinois, and attended New Baden High School. He is a veteran of the U.S. Army and served in South Korea.

Mr. Wobbe served the Belleville community as a police officer for 20 years and worked an additional 10 years in security with the Monsanto Corporation before retiring in 1989. In his retirement, he and his wife, Mary, traveled throughout the United States extensively in a custom van following their whimsy from state to state. Their last home was on the shores of Stolberg Lake, where they enjoyed hosting their children and grandchildren at innumerable BBQ’s, fish fry’s, birthday parties, and 4th of July celebrations. For the last 8 years they lived at the Shrine Apartment Community enjoying a more carefree lifestyle.

Mr. Wobbe was a skilled home builder and craftsman. In 1953 he built their first home in Belleville from a book titled  “ How to Build Your Dream Home for Under $3500” and subsequently designed and built a larger home for his growing family, as well as an investment duplex. All of his children benefited from his help remodeling and repairing their own homes while learning valuable lessons about all aspects of life in the process.

Vince was preceded in death by his parents, Nick and Sophia, nee Albers, Wobbe; five brothers; and two sisters.

In lieu of flowers, memorials may be made to St. Augustine’s Parish in Belleville. Condolences may be expressed to the family online at www.rennerfh.com.

I worked with Vince at Monsanto. Always supportive and a true gentleman. The day I graduated from college, I was scheduled to work. He stepped right up worked for me. He was that kind of a man. Blessings!

Worked at Monsanto the same time as Vince. Had many good conversations with him. Very outstanding person. Ate fish at the Quill club with Vince and Mary. Condolence to Mary.

Todd, we are so very sorry for your loss. Our deepest sympathies to you and your family.

My sympathy to Brad and all the family.