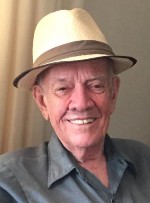 Mr. Eichenseer was a retired plumbing contractor.  He had been co-owner, with his brother Harold, of Eichenseer Plumbing in Hecker, IL.  He was a member of St. Peter’s Cathedral Parish in Belleville, IL.  Virgil was an avid pheasant hunter, often traveling to the Dakotas for hunting, and he also enjoyed frogging.  A World War II U.S. Coast Guard veteran, he participated in the Greater St. Louis Honor Flight to Washington, D.C., for World War II veterans.

Memorials may be made in the form of Masses.  Condolences may be expressed to the family online at www.rennerfh.com.

Visitation: Friends may visit with the family from 10 to 11 a.m. Saturday, May 7, 2016, at St. Peter’s Cathedral Catholic Church, Belleville, IL.

Funeral:  A Mass of Christian Burial will be held at 11 a.m. Saturday, May 7, at St. Peter’s Cathedral with Msgr. John Myler officiating.  Inurnment will follow at Green Mount Catholic Cemetery Mausoleum, Belleville, IL.

Dear Virgil thank you for being a good friend. It really touched my heart that you cared so much. It has been my honor and pleasure to know you and my deli counter at Schnucks will never be the same . I will miss you my friend.

Shirley, my heartfelt condolences to you and your family. Virgil was such a kind and sweet man. I met him at Denny’s. He smile always would brighten my day.

To Shirley and Virgil’s Family,
so sorry to hear of your loss.
Bob and Leslie go back a long way when in business.
Bob and Marcella Stauder God Bless.