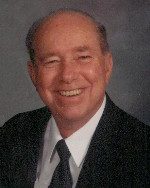 Virgil was a loving husband, father, grandfather and great-grandfather.  He was retired as District Sales Manager for Kelly-Springfield Tire Co. and District Sales Manager for Ben Tire Distributors of Toledo.  He was also former sales manager for the New Era Oil Company and wholesale sales manger for Crystal Tire Company of Crystal City, Missouri.  Virgil served in the U.S. Air Force during World War II.  He was a member of St. Teresa Catholic Church, Belleville, IL and was also a lifetime member of the Belleville-Swansea Moose Lodge #1221.  Virgil was also a member of the American Legion Post 0058.

Virgil’s family would like to thank St. Paul Senior Community and a special thank you to personnel of Heartland Hospice for their wonderful, loving care of Virgil.  They would also like to thank Tawanda, Beth, Chris, Verna, Meagan and Pat, the women who gave great care and compassion to Virgil during his last nine months of life.  Also, thank you to Tom, Deb, Patty, Marty, Sue and John whose generosity allowed Virg and Marg to live out their lives together in a peaceful and loving environment.

In lieu of flowers, memorials may be made to Heartland Hospice.  Condolences may be expressed to the family online at www.rennerfh.com.