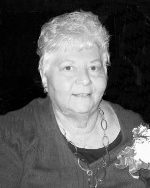 Virginia graduated from Notre Dame Catholic High School in 1956. She worked as a nurse’s aide for 15 years. Virginia was a member of the Polish National Alliance. She was a den mother for her boys, participated in their sports, and was involved with many activities throughout their childhood years and beyond. Most of all, Ginny was a loving and caring wife, mother, sister, grandmother, great grandmother, and friend to all she knew. Virginia would always put others first before her own needs.

Virginia was preceded in death by her parents, Joseph and Wanda Grudzinski; a son, Michael; infant grandsons, Joshua and Nicolas Bowles; and a brother, Buddy Grudzinski formerly of Houston, TX.

Memorials may be made to the Heartland Hospice Care Memorial Fund. Condolences may be expressed to the family online at www.rennerfh.com.

Visitation: Friends may visit with the family from 12 to 1 p.m. Friday, September 22, 2017 at St. Henry Catholic Church, Belleville, IL.