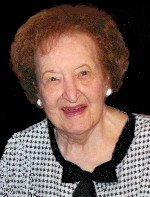 Print Obituary
Virginia H. “Ginna” Cordie, 97, of Belleville, Ill., passed away peacefully on Sunday, November 15, 2015 at St. Paul’s Senior Community in Belleville, IL, with her nieces by her side.

Ginna graduated from the Academy of Notre Dame in 1936.  A bookkeeper for several businesses, she retired from Peerless Enamel Company in Belleville, IL.  During World War II, she volunteered as a Grey Lady at Scott Air Force Base and at the USO.  She was a member of the Daughters of Isabella, the Zonta Club, and three card clubs, including one that she began in high school that lasted more than 60 years.

Ginna was the babysitter extraordinaire to two generations, whom she treated as if they were her children.  This generous aunt was a gentle soul who never spoke an unkind word.  She loved to travel, play cards, win at quilt bingo with her sister, and spoil her nieces and nephews with gifts.  Easy-going, Ginna was always game for whatever adventure her family roped her into.  She was the family historian, cake decorator, back rubber, afghan maker, lunch buddy and M&M supplier.

Ginna was preceded in death by her parents, Joseph and Olga, nee Dengler, Cordie; brother and sister-in-law, LeRoy and Virginia Cordie; sister and brother-in-law, Dorothy and Clinton “Freckles” Goodall; a brother, Paul, and a sister, Genevieve, who both died in infancy.

Memorials can be made to Family Hospice (familyhospice.org).  Condolences may be expressed to the family online at www.rennerfh.com.