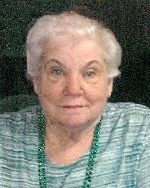 Ginny (or Ginger to her oldest friends) was the rock of her family, and she loved them all unconditionally – family always came first.  She had a great sense of humor, which she never lost, even at the end.  She had many close long-time friends and made many new friends along the way.  To know her was to love her.

Ginny was a very social person, and loved a good party, especially if it included the occasional margarita which was her favorite drink. Before her illness, she loved to shop and travel. She and Joe took many trips, some to visit family and some just to tour the U.S. and see new sights. But her true passion was her grandchildren and great-grandchildren. Her greatest joy was spending time with them and helping them whenever she could.

She was preceded in death by one daughter, Ellen Nebgen; a grandson, Daniel Curran; her parents, George J. and Elizabeth A., nee Breyer, Koesterer; one sister, Betty Speake; and one brother, George Koesterer.

Memorials may be made to Hospice of Southern Illinois or to the Belleville Area Humane Society. Condolences may be expressed to the family online at www.rennerfh.com.

Burial will be at a later date at Green Mount Catholic Cemetery, Belleville, IL.