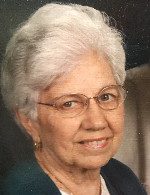 Mrs. Rensing was a secretary for 25 years at Liese Lumber Company in Belleville.  She belonged to the Belleville Holzschnitzers Club, she was a member of St. Peter’s Cathedral Parish, Belleville, IL, and belonged to the quilters group at the church.

Virginia was preceded in death by her husband of 63 years, Ralph F. Rensing, whom she married on November 20, 1948, and who died on June 20, 2011; her father, Edwin Conroy; her mother, Adelia, nee Hohner, Conroy; her step-mother, Laura Conroy, nee Titze; a step-sister, June D. Horsfall, and a brother-in-law, Raymond (Evelyn) Rensing.

Memorials may be made to the American Parkinson Disease Association.  Condolences may be expressed to the family online at www.rennerfh.com.