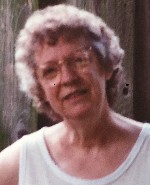 Vivian retired from Hunter Packing Company in East St. Louis, IL, where she was an administrative assistant. She was a master of word puzzles and Sudoku.

She was preceded in death by her husband, Nicholas Fuhrman; her parents, John Herman and Helen R., nee Overton, Overberg; a brother, Donald Overberg; and a sister-in-law, Margaret (Arthur) Gray.

Surviving are her niece, Jennifer Overberg;
a nephew, John Overberg;
her special friend and companion, Bud;
and many other friends and extended family.