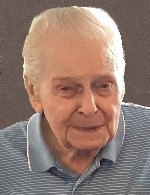 Walter was a U.S. World War II veteran who retired from the Air Force after over 20 years of service. Later, he retired from the United States Postal Service after working for many years as a letter carrier.

He was preceded in death by his parents, Nelson and Hilda, nee Backstrom, Johnson; a sister, Arlene Peterson; his beloved wife of 53 years, Aurile, nee Charon, Johnson, whom he married August 16, 1947, and who died September 30, 2000; and a grandson, Matthew Allison.

Surviving are his son, Thomas Johnson of Belleville, IL;
his daughter and son-in-law, Sharon and Robert Allison of Wichita, KS;
a grandson, Jonathan Allison of Wichita, KS;
his sister-in-law, Eleanor Johnson of Cloquet, Minnesota;
a brother-in-law Roy (Diane) Charon of Cloquet, Minnesota;
nieces and nephews;
and his dear friends, Richard and Ginger Rush of Springfield, IL.

Walter was a devoted husband, father, and grandfather, as well as a loyal friend. He will be greatly missed by all.

In lieu of flowers, memorials may be made to St. Joseph’s Indian School, 1301 North Main Street Chamberlain, South Dakota 57325, saintjosephs@stjo.org. Condolences may be expressed to the family online at www.rennerfh.com.

Burial will be in Green Mount Catholic Cemetery, Belleville, IL.