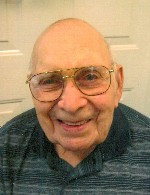 Walter grew up in Lombard, IL. He began his lifelong career as a meat cutter at the age of 13 by helping his father in the meat market. He was a World War II U.S. Army veteran who served as a supply sergeant in the Army Quartermaster Corps.

Walter and his wife, Mary Louise, made their home in Elmhurst, IL. After retirement in 1979, Walter and his wife moved to Cherokee Village, AR. In 1999, they relocated to Belleville, IL, to be closer to their daughter and grandchildren.

He was preceded in death by his wife of nearly 58 years, Mary Louise, nee Clark, Kleinedler, whom he married April 29, 1943, and who died February 19, 2000; his parents, Fred and Mary, nee Cook, Kleinedler; four brothers, Fred, Irvin, Bernard, and James Kleinedler; and two sisters, Mary Shoemaker and Margaret Thompson.

The family would like to extend a special thank you to the dedicated staff at St. Paul’s Home who loved and cared for Walter.

Memorials may be made to Heartland Hospice or to St. Paul’s Home, Belleville, IL. Condolences may be expressed to the family online at www.rennerfh.com.

Dear Linda, John and Kurt,
It is such an honor and a blessing to have met your father. I will always appreciate his kindness, good nature, and humor. My friend Rich also was taken by Walt’s good character and welcoming nature. Walter has been my best friend here.
Your family’s love of their father, grandfather and great-grandfather is clear in the warm gathering of his beloved family on his birthday. I am happy to have met Linda’s fine sons and daughter and some of her grandchildren. I recall a granddaughter’s playing her clarinet for her grandfather and her grandson’s easing the burden of Walter’s daily burden in getting up and down these long, carpeted hallways. I remember Linda’s faithfulness in attending to her father and being company to him, and I recall how Walt looked forward to Wednesday at seven p.m. when he could talk to John and hear news of his and his wife’s travels and of their tomatoes and fruit trees. I was pleased to meet Kurt and his wife and learn of his work.
I am happy that you would share your father and grandfather with us. I will pray to him and ask him to pray for me. I know that he and his wife, your mother, grandmother and great-grandmother, will always watch over you.
Greg Voss

Please accept my sympathy. Walter was in the same hallway as my Mom, Lucy Weissert, at St. Paul’s. I often said hi to him in the hallway. I did talk with Linda a few times. He always had a smile on his face.