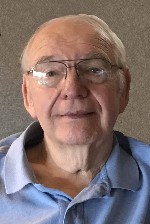 While Wayne worked in the banking and financial services industry for 48 years before retirement, he most enjoyed spending time with family and friends. He loved to travel and take cruises with his wife.

He was preceded in death by his mother, Helen; his parents, Clement and Virginia, nee Reno, Biver; and a sister, Rita, nee Biver, Schwaegel.

Memorials may be made to Devotion Hospice, 508 West Lewis Street, Conroe, TX  77301, or online at http://www.devotionhospice.com. Condolences may be expressed to the family online at www.rennerfh.com.

Funeral: A Mass of Christian Burial will be at 10 a.m. Thursday, October 31, 2019, at St. Augustine of Canterbury Catholic Church, Belleville, IL, with Msgr. William McGhee and Msgr. Carl Scherrer concelebrating.