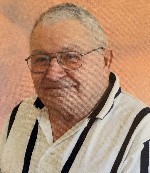 He enjoyed the outdoors, especially Saturday trips to his clubhouse where he enjoyed splitting wood and net fishing and hunting. He could repair almost anything and preferred tinkering in his outdoor shed. He was an avid horseshoe pitcher and enjoyed attending auctions. He loved watching his granddaughters play sports and Cardinals baseball.

Wayne was preceded in death by his parents, Roy C. and Marie L., nee Rausch, Kunz; and a sister, Wanda Lee Harris.

Memorials may be made to St. John’s United Church of Christ, Smithton, IL.  Condolences may be expressed to the family online at www.rennerfh.com.

Funeral:  Cremation services were accorded, and burial will be at St. John the Baptist Catholic Cemetery, Smithton, IL.