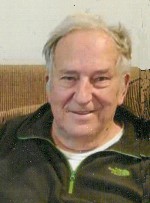 In lieu of flowers, memorials may be made to the St. Clair Lodge #24 Masonic Lodge. Condolences may be expressed to the family online at www.rennerfh.com.