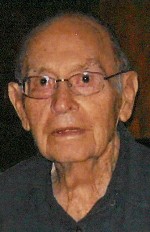 Mr. Stahl was a farmer for 13 years.  After farming, Wib started working for the Smithton Lumber & Supply Company in 1956, and was a manager there for 30 years.  He was a lifetime member of St. John United Church of Christ, the St. Clair County Farm Bureau, and Smithton Turner Society.  Wib also was an avid fisherman and a coyote hunter.

Memorials may be made to St. John United Church of Christ, Smithton, IL.   Condolences may be expressed to the family online at www.rennerfh.com.

Funeral: A memorial service will be at 12 p.m. Thursday at the church with Rev. Dwayne Dollgener officiating.

I have many memories of this wonderful man! He and Melba lived next door to my parents for nearly 35 years. I made it a point of visiting with them every time I returned to Smithton. I will miss him! Our condolences to the family! Janice Klein Walters

Dear Rick & JoAnn. Joe & I want to express our sympathy over your Father’s passing. We know how hard it is during these times, but we will have you in our thoughts and prayers.
Yours Truly Joe & Laurel