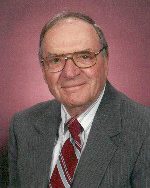 He was preceded in death by his wife of 61 years, Arlene C., nee Houba, DeMestri, whom he married on June 11, 1955, and who died on November 2, 2016; his parents, Frank and Margaret, nee Nichols, DeMestri; a brother, Henry DeMestri; and four sisters, Catherine Hill, Mary Keller, Jean Moyer, and Margaret Brestal.

Memorials may be made to Heartland Hospice or to St. Paul United Church of Christ.  Condolences may be expressed to the family online at www.rennerfh.com.