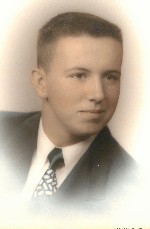 Bill was a member of the Belleville Police Department, retiring in 1996 as a detective, and was a member of the Major Case Squad.  He was an avid bowler and participated in numerous leagues, eventually achieving the “perfect” score of 300 and was inducted into the Bowling Hall of Fame. Bill participated in other team sports as pitcher for the Belleville Police Department softball team and horseshoe throwing, as well as many community events.  He was a member of Holy Trinity Parish where he served as an usher and enjoyed working in the fish and beer stand at their picnics and fish fry’s.  He was a security worker at Fairmount Park racetrack where he eventually gave up his position in the last few years to spend time at home with his wife and beloved dog, Buddy.

There were no strangers to Bill as he would meet and talk to everyone in town.  Many mornings were spent at the Bread Company and evenings at the Moose Lodge. Bill will be fondly remembered for his quick wit and quiet, patient demeanor.

He was preceded in death by his parents, Earl A. and Teresa S., nee Dobbins, Miller; a sister, Vera Lee Witwer; and a brother-in-law, Harley Witwer.

In lieu of flowers, memorials may be made to any animal rescue organization. Condolences may be expressed to the family online at www.rennerfh.com.

A celebration of his life will be planned this spring.