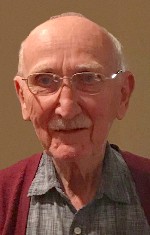 Bill was a CPA having worked as a financial controller and chief financial officer throughout his career. He worked for various companies in the area including Blue Cross Blue Shield, McDonnell Douglas, Boeing, Arch Mineral Coal and finally as a self-employed CPA before his retirement. He was involved heavily in the mentoring of younger CPA’s. After retirement he worked for his son-in-law at Slocomb Dental Lab, Belleville, IL. Bill served on several boards in the community, belonged to the National Society of CPA’s, and was the former post commander of the American Legion Post 58 at Freedom Farm, Freeburg, IL. He was a United States Army veteran and served on the 101st Airborne in Fort Campbell, KY.

He was preceded in death by his parents, William and Elsie, nee Jones, Tourville; a brother, Frank Tourville; two sisters, Shirley King and Ida Ginter; and two brothers-in-law, Doug Burden and Richard Quayle.

Memorials may be made to Siteman Cancer Center for Lymphoma Research or to the Disabled American Veterans. Condolences may be expressed to the family online at www.rennerfh.com.