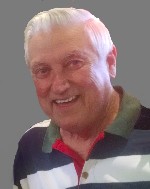 Mr. Burgert retired from the Illinois Department of Transportation as an engineering technician.  He was a member of St. Joseph’s Catholic Church, Freeburg, IL.

He was preceded in death by his parents, Ben A. and Clara G., nee Krieg, Burgert.

Memorials may be made to St. Joseph’s Grade School.  Condolences may be expressed to the family online at www.rennerfh.com.

November 27, 2015
Bill and Jim,
I remember your dad and my brother-in-law, Bill, with great fondness. Bill was actually more than just a brother-in-law to me. He was a big brother and a second dad. I first met him when I was about 12 years old. That was when Bill and Judy, your mom and my sister, first started dating. That was in 1956 as I recall. Next to my mom and dad, Bill did more for me than anyone else on this planet. He took me hunting and showed me how to hunt rabbits, squirrels, ducks, and geese. He got my mom and dad to get me a Winchester Model-12 shotgun. I still have it. He took me fishing and showed me how to fish. He introduced me to fly fishing. We used to go to a private lake in New Athens and fly fish for bluegill. We caught some dandies. Bill, my dad and I would go to Junior Wrights lake in Freeburg and fish for bass. We also went night fishing for catfish at sloughs near Fayetteville. He helped me in baseball and basketball. Bill and my dad never missed a game I played. When I got my driver’s license at 16, he let me use his car. Once, I backed up and bent the tail pipe. He never got mad. He got me my first job. It was with Friedewald Consulting Civil Engineering in Belleville. Bill worked for them and convinced them to hire me during the summer when I was in high school and college. We worked on a survey crew with Dutch Thompson. Dutch ran the transit. Bill worked the chain and I held the pole. I was thrilled to have that job. One summer we had to cut through the woods with machetes in order to run a survey line. It was in August and the temperatures were in the nineties. I never worked so hard in my life. After work, Bill and I would go the tavern, drink beer and shoot pool. He taught me how to shoot pool although I was never as good as he was. I learned to water ski from Bill. He and Judy had a runabout that they would take to the Sportsman’s Club in Marissa. The three of us took turns skiing and driving the boat. Bill, my dad, and I used to play a lot of poker. We had some great poker games at my mom and dad’s house. Bob Bunch, Jerry Triebout, Chuck Kennedy, and Bob Poelker were others that joined with us. As I recall, I was easy money, but it did not matter.
I really admired your dad. He was such a good looking man and such a good athlete. He got a baseball scholarship to SIU. He could make friends with anyone in a minute. Everybody liked him. When I was with your dad, it was always a picnic. He made it a picnic no matter where we were or what we were doing. He was just that way.
In transitioning from a teenager to a young adult, I went through some tough times. Your dad was always there to help me anyway he could. When I had a problem, I went to him first. I was that close to him.
He was such a good person and he was especially good to me. I will miss your dad, but I will always cherish the good times that we had.

I am heartily sorry and sad for you both. I lost my dad in June so I truly understand how profound the loss of a parent can be. It is like a little piece of your soul goes with them. I hope you can find peace and love during this time. I am sincerely thinking about both of you.

Bill will certainly be missed by many in the community. I often walk my dogs past his house…he was always so friendly and generous in sharing the abundance from his garden. My sincere sympathy to his family. Diane Hanft

I think the world lost a great and good man. I have not seen him in years, but we went to St Joseph’s School at the same time, although he was four years ahead of me.

But I was raised as a virtually only child and lived in the rural areas with almost no playmates until age 11.

At about age 8, I encountered “sports” (baseball and basketball). I was little and nonathletic. My Dad had taught me hunting and fishing, not baseball So I was always chosen
“last” and frequently “chuncked”
Bill saw this happening on the school yard and intervened telling the others to ‘give me a chance” everybody has to learn from scratch. He was a natural born leader and I never forgot it or him.

I wish to express my deepest sympathy on the death of your dad. I was with great sadness that I learned of his passing and your loss.

As a toddler growing up in Freeburg the Burgert house was my second home. I remembering spending a great deal of time with your wonderful grandparents, Ben and Clara. The Walter Lucash family lived just across the street of which I was part of. The two families became great friends and remained so over the many years. I was a big fan of your dad. I looked up to him in many ways especially as a high school baseball player. Your grandparents even took me to see some away games in a two-toned fifty-something blue Chevy affectionately named the “Blue Goose”. I could not have been more than 3 or 4 years old at the time. And, if I was not able to go to a game I would wait at home and run across the street when your dad got back and carry his glove and bat from the car to the house. I have pictures (black and white of course!) that I cherish and treasure to this day. That was the beginning of a long, beautiful and loving relationship with your grandparents and your dad.

After I graduated from high school I traveled to Texas to attend college and basically became a Texan by choice. However, when I returned to Freeburg to visit family I always included a stop to see your grandparents and your dad if he was around. They all had such a profound, positive influence on my childhood years and over the years became the best of friends. The Burgert family, Ben, Clara, and your dad will always have a very special place in my heart and memory. I am reminded of a quote by Helen Keller who said, “What we have once enjoyed, we can never lose…All that we love deeply becomes a part of us.” Please know that you two and your families are very much in my thoughts at this time.