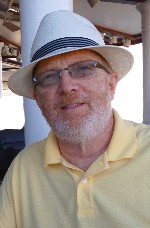 A 1963 graduate of Rantoul Township High School, he went on to Southern Illinois University Carbondale where he earned a Bachelors’ Degree in Art in 1967 and a Master’s Degree in Education in 1968.

Bill taught at Belleville Township High School West for 34 years, retiring in 2002.  While the majority of his tenure was in the art department, he also taught special education for 11 years.  Upon retirement from BTHS West, he began a second teaching career at Southwest Illinois College in the art department, specializing in life drawing.

Bill left a legacy of art throughout the city of Belleville, from the students he so skillfully guided to the mural he designed and painted on North Illinois St. with his great artist friends.  He created plein aire paintings of historic buildings each year that were auctioned off to raise money for the Belleville Historic Society.  He also designed the official logo of the Belleville Stags Vintage Base Ball Club.

One of Bill’s greatest loves was his participation in the High School Art Show for Art on the Square.  As one of the founding organizers, he worked tirelessly to help coordinate the showing of the works of area high school artists, making it a highlight of Art on the Square.  In 2017 he was named Art on the Square co-volunteer of the year.  His talent as both an artist and an instructor has been shared with his family, inspiring his niece and two granddaughters to follow in his footsteps.

Bill was a loving husband, father, grandfather, brother and uncle.  He was a quiet man with a wonderfully dry sense of humor who was adored by all.  He was also a patient man who led by example for his family and students.

Twice in his life, Bill went into remission for lymphoma.  But after over five years of battling, it was ultimately myelodysplastic syndrome (MDS) in his bone marrow that took his life.  Bill continued to participate in numerous studies throughout his illness to further the efforts to find a cure for lymphoma.

Bill was preceded in death by his father, Forrest H. Evans; his mother, Eula D. Evans (nee Emerson); a brother, Gary L. Evans; and a grandson, Henry A. Roth-Evans.

In lieu of flowers, donations may be sent in Bill’s memory to the Siteman Cancer Center https://siteman.wustl.edu/give/siteman-advancement-office/ or to the Bill Evans Memorial Art on the Square High School Award Fund https://www.paypal.com/donate?hosted_button_id=C2VU8E3HWZQNS.  Condolences may be expressed to the family online at www.rennerfh.com.

Funeral:  Due to COVID-19 restrictions, a private visitation and service for family members will be held Saturday, February 13, 2021, at George Renner & Sons Funeral Home, Belleville, IL.