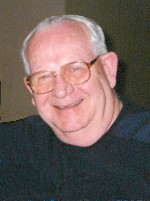 Mr. Fenoughty was the owner and operator of the Belleville Outdoor Store and was a co-owner of Redbird Cleaning Company before his retirement.  He had also worked as a sales manager for Eagle Stamp Co. A member of St. Henry Catholic Church and a former member of St. Peter’s Cathedral, Bill was an active member in the catholic church. He served for more than 25 years as chairman of the Crippled Children’s Committee. He was a member of the Belleville Elk Lodge #481 and was a past exalted ruler of the lodge. Bill was very proud of his family and his Irish heritage.

He was preceded in death by his wife of 61 years, Lorraine Mary, nee Barr, Fenoughty, whom he married on January 25, 1958, and who died on June 8, 2019; his parents, William H. and Vera M., nee Schroeder, Fenoughty; a brother, Michael Fenoughty; and three sisters, Maureen Hechenberger, Gail Nesbit, and Shannon Hechenberger.

Memorials may be made to Hospice of Southern Illinois, or to the Alzheimer’s Association. Condolences may be expressed to the family online at www.rennerfh.com.

A Celebration of Life will be held at a later date.