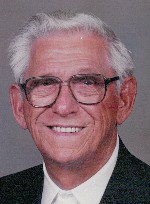 Bill was an active member of St. Peter’s Cathedral Catholic Church, Belleville, IL.  He served as an usher for over 50 years, was involved with the Holy Name Society at church, and was an original member of the bingo crew.  He retired from Scott Air Force Base after working over 30 years in Civil Service.  Bill was also a member of the Knights of Columbus Belleville Council 1028, the CK&L of I, Southside Improvement Association, Belleville Senior Citizens, and the Illinois Militia.