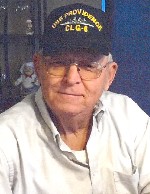 Bill worked as a carpenter from local 480 for more than 30 years before retiring.  He was a member of the Smithton American Legion, the Smithton Sportsman Club, and a U.S. Navy veteran.

He was preceded in death by his wife of 50 years, Priscilla E., nee Hines, McMillian; his parents, William G. and Cleada D., nee Martin, McMillian; and a brother, Leon McMillian.