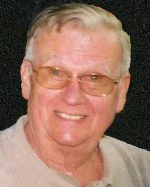 Bill was a World War II U.S. Army veteran, and was stationed in England.  He attended Westminster College in Fulton, MO.  Bill was a member of First United Presbyterian Church, Belleville, IL, and was a retired deacon at the church.  He was also a member of Belleville Elks Lodge 481, Belleville/Swansea Moose Lodge 1221, the Waterloo Band, the Telephone Pioneers, and the Ham Radio Club.

He was preceded in death by his parents, Hugh A. and Ruth M., nee McKee, Burke.

The family would like to extend a special thank you to the staff at Dammert Geriatric Center for the loving care given to Bill.

Memorials may be made to the First United Presbyterian Church. Condolences may be expressed to the family online at www.rennerfh.com.

Visitation:  Friends may visit with the family from 10 to 11 a.m. Saturday, November 4, 2017, at First United Presbyterian Church, Belleville, IL.

Burial will be at Kolmer Memorial Cemetery, Waterloo, IL.