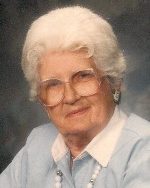 She graduated from Salem High School and on December 16, 1933, married Rex Egelston in Charleston, IL. They were married for more than sixty years until Rex’s passing in 1994. Wilma worked for many years, beginning with the Brown Shoe Company in Salem, Illinois. After she and Rex made their home in Cicero, IL, she worked at Bradford Gear Company and then at Hotpoint as an assembler during the Second World War. In 1947, they moved to Jonesboro along with their sons where she began working at the International Shoe Factory. Wilma retired from the shoe factory and became the house mother for student nurses at Anna State Hospital where she later served as a seamstress until her retirement. In 2007 she moved to Cedar Trails Assisted Living Center in Freeburg, Illinois where she was closer to her son, Donald, and his family.  She was a resident at Cedar Trails since the day it opened.

Wilma was a proud member of the Daughters of the American Revolution and an accomplished seamstress, having sewn most of her own clothes. She had a zest for life and enjoyed fishing, playing cards, canning vegetables from her garden, attending family reunions, camping, and traveling with family throughout the United States. Wilma was a great teacher, sharing her skills for knitting, sewing, baking, gardening, playing cards and driving with many. In her eighties, Wilma could be found sitting cross-legged on the floor playing games with her great-grandchildren and having lunch with her friends at McDonalds. She was devoted to her family and friends, even providing sanctuary to them in her home during the Depression. She will forever be remembered for her chocolate chip cookies, her homemade noodles, her strawberry jam, her giggle and her spunk.

Wilma was a member of the Christian Church, (Disciples of Christ) in Anna, Illinois and frequently participated in Church Services offered by the Sanctuary Church at Cedar Trails in Freeburg.

Memorials may be given to the Hoots Chapel Church, 5276 Hoots Chapel Rd. Salem, Illinois   62881 or the Sanctuary Church, 998 N. State St Freeburg, Illinois 62243. Condolences may be expressed to the family online at www.rennerfh.com.