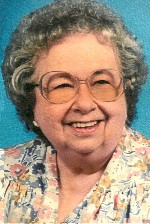 After graduating from high school in 1942, Wilma worked at Scott Field (SAFB) while her boyfriend, Ed was serving in Europe during WWII. Upon his return home, Ed and Wilma were married December 15, 1945.  In the early 1970’s she worked as a secretary for the First Baptist Church.  In 1973, she worked as a secretary at Lawton-Byrne-Bruner in St. Louis.  Returning to SAFB, Wilma worked in civil service in the ACD (Airlift Communications Division) in 1981. Then in 1984, she moved to the Realty Department of the Headquarters, Military Airlift Command (HQ MAC) Engineering Department.  She was chosen for this job because she was a licensed real estate salesperson and had worked 19 years with her husband, Ed, typing appraisals, legal descriptions and closing statements.  Wilma retired from SAFB in 1991.

Wilma was a member of Trinity United Church of Christ and loved the many friends she had at Trinity. While Wilma was busy raising six children, she was Brownie and Cub Scout Leader. She was PTA President for Jefferson and Roosevelt schools as well as PTA Council member and she helped organize the annual school picnics at Bellevue Park.

Wilma was an avid reader since her childhood when she loved to read the Horatio Alger novels.  She took a speed reading course in 1984 and she read so fast that she was constantly in search of more books to read. Wilma loved watching her St. Louis Cardinals, “Go Cards”.   She started coloring and painting late in life and her room was decorated with her “artwork”.  She also was awesome at crossword puzzles.

The family would like to express their heartfelt gratitude to the staff at St. Paul’s Home and Hospice of Southern Illinois for their loving care and support.

Memorials may be made to the Trinity United Church of Christ. Condolences may be expressed to the family online at www.rennerfh.com.